Hope and Joy in a Time of War 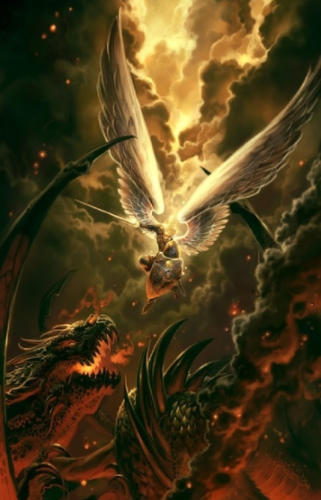 On this Gaudete Sunday, I thought I would take a much different approach to this Feast of Joy. Those of you who know me personally know that I take the notion of spiritual warfare very seriously.  By “spiritual warfare,” I am referring to the idea that our lives here are part of a cosmic struggle in which evil tries to undermine the glory of God before the final consummation of all things.  Despite this being an element of my personal spirituality, it sometimes requires a little more prudence for me to address this concept as a professional theologian – which, honestly, doesn’t make much sense, but I guess there’s an expectation of an academic to be more “grounded.”  Be that as it may, as we move through the liturgical drama of the Advent season, instead of reflecting on the joy of Christ’s coming directly, I want to offer a reflection about why we need Christ to come into our world – the spiritual battle still raging between Christ’s Kingdom and the power of evil.

The battle that seems most obvious to so many these days is the one involving the actions of violent, radical Islam against the West. I think Pope Francis is right when he calls these actions (both by and against ISIS) part of a “piecemeal World War III.”  For myself, for the purposes of this post, I am going to sidestep trying to navigate through the complexity of discerning how to act against terrorist violence without stereotyping all the adherents of an entire religious tradition (something Christians should be more sympathetic to than many examples I’ve seen in the past month or so), or of offering aid to refugees while being vigilant against covert infiltration by dangerous extremists.  These are important and complicated issues, and while I certainly have thoughts on them, they are not my concern right here, right now.

More germane to our prayerful reflections this season is the fact that all of the anxiety, fear, heartache, anger, and violence associated with these events are aspects of the spiritual war in which we are all engaged. It is consuming our attention at the moment, and not without good reason.

But the satanic scheme to undermine our confidence in God’s love and providence is rarely as blunt and in-your-face as brutal violence perpetrated in the name of God Himself. It is undoubtedly effective (as evidenced by the evergreen-but-historically-inaccurate notion going around that “religion is the cause of all the violence in the world”), but in truth, I suggest that this is merely a smokescreen.

At this point, I need to be very clear. I am in no way downplaying the significance of these terrorist attacks or attempting to minimize the horrific tragedies introduced into so many lives.  I am not suggesting that this is only a problem of misunderstanding or that if we ignore this issue, it will go away.  But I am trying to demonstrate a higher level, if you will, to the problem.

By way of further explanation, let me use a much different example that is another battlefield in this spiritual war. Here in Massachusetts, the State Senate recently passed a bill that would make Planned Parenthood’s sex ed curriculum the default curriculum for all public schools that have a sex education program, grades K-12.  This is just a single assault in the ongoing battle over the truth about human sexuality, but it is an important one, as the arguments that allowed this bill to pass 32-6 demonstrated ideologically and emotively driven arguments that proved unusually resistant to reason and documented fact.

I suppose a traditionalist Catholic moral theologian bemoaning the sad status of sex education in a secularized culture is hardly novel. But this is a far more insidious attack on the Kingdom of God than jihadist ultraviolence because of its subtlety.  As a professional observer of the sexual revolution and its effects, it is fascinating and unsettling to see how slowly but surely, from many different angles, we have come to the place our culture presently finds itself.  While obviously many factors contribute to this, a spiritual primary cause must be recognized: the desire of personified evil to undermine the wisdom and beauty of God’s plan for love and sexuality.

And before we have a chance to consider how to respond to such a situation, the enemy launches an attack from a different angle: the unusual circumstances of the recent shooting at a Colorado Planned Parenthood facility, giving numerous outlets for the nation’s largest abortion provider and its supporters to play the martyr in the press, noting their righteous plight in offering “essential health services” while threatened by “Christian domestic terrorists.”

This move has temporarily undermined the brilliant work of the Center for Medical Progress in revealing, not just the legality or illegality of Planned Parenthood’s practices regarding body parts of aborted children, but more importantly, the thoroughly inhuman attitude towards human life on display in these videos. The Colorado shooting has turned the tables back around in favor of Planned Parenthood, however.  From the higher perspective of spiritual warfare, one can see the influence of spiritual forces moving a mentally challenged man to violence and making it look like it was motivated by Christian devotion.

(Of course, in the rapid movement of contemporary news cycles, however, someone evidently forgot to check with Screwtape before motivating another shooting so soon in San Bernardino. )

In all of these instances, human decisions bring great evil and suffering into the world. I am not suggesting that these people have no responsibility for their actions; that would clearly be an irrational conclusion.  But behind all of this human agency are the notes of a cosmic symphony, and those looking to play out a beautiful song of creation contend with those who only seek discordance.

Recognizing this symphony is what Jesus meant when he said we need to be as “shrewd as serpents” (Mt 10:16) and what John meant when he said we must “test the spirits” (I Jn 4). We are baptized as prophets and kings to give witness to the truth and to be responsible stewards of the Kingdom.  We are formed in Christ during a time of war, since the final battle and the end of the world began at the cross.

As Christians, we cannot see these situations from the comfortable perspective of a worldly ideology that neatly categorizes the world along the lines of political positions. This too is part of the enemy’s plan: to keep us thinking small, to allow us to diminish ourselves – not only by our sinful actions, but also by our superficial, sinful judgments of others.  This is not just about seeing Christ in everyone we meet (a truthful command that has unfortunately been diminished to the level of a platitude), but also seeing the stakes involved in this battle: the very soul of the human race.

The whole season of Advent is, of course, a season of joyful expectation. But in addition to participating in the drama of the Incarnation in history, we are also look forward to the Second Advent – the final revelation of Christ at the end of all things.  Our lives here now exist in a time of tension between what has been and what is still to come.  We should feel ill at ease, like we’re waiting for something to happen at any moment.  Like a soldier on a battlefield, knowing the Enemy is near.

Yet today reminds us that, in the midst of darkness and strife, we should also hold onto hope, knowing that our enemy’s final defeat is swiftly at hand and we only need to hold the line until He comes. Let’s keep alert to the battle behind the evidence of our senses, the battle beyond our reason too often focused solely only on this world and the mad, mad events going on around us.  The war is bigger, the enemy greater and more powerful, but our salvation stronger and surer still.  Maranatha! Come Lord Jesus! A Blessed Advent to you all.