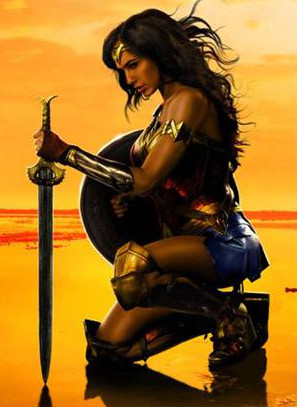 OK.  Let me address the elephant first. Yes, it has been a full year since I last posted here.  I have no good excuse.  I had set myself what I thought was a reasonable writing schedule and I, uh, failed utterly.  So I’m going to set more modest expectations and focus on much shorter pieces and see if I can’t generate some interest and momentum that way.  Moving on…

There is so much that I would like to write about Wonder Woman both as a character and as a movie.  I am especially interested in the success of a superhero movie with a female lead and the amusing controversy that surrounds this idea.  I am also interested in whether the Wonder Woman on screen matches the character as portrayed in the comics presently and as her designer originally conceived her (the answer, by the way, is no on both counts, and that is a very, very good thing).  And I am interested in the portrayal of the Greek gods in the film, which ultimately looks a lot less like Greek mythology and a lot more like a Biblical text.  This too has caused controversy.  Spoilers ahead.

Wonder Woman (let’s just call her Diana from this point forward; it’s a lot shorter) has not had a consistent origin in her 75 year history.  To simplify things, let’s reduce her origins to two basic variations: the first is that she was sculpted from clay by Hippolyta and brought to life by her entreaty to the gods.  The second is that Diana is herself a demi-goddess, the daughter of Zeus and Hippolyta.  The movie chooses to go with both options, as Diana is raised believing the clay story and learning the truth about her father later on.

Ares, the god of war, is one of Diana’s long-standing antagonists in the comics (and it should be noted that Wonder Woman has really crappy villains overall – in fact, with a few exceptions, I’d even go so far as to say that if your name isn’t Batman or Flash in the DC Universe, your villains are lacking).  In the movie, Ares is portrayed as the last of the gods, excepting Diana.  He is the source of all the conflict, strife, and hatred in the world.  Zeus, the creator of humanity, instilled his creatures with a nobility that the Amazons were to especially embody and protect, and thus Diana leaves the island of Themyscira and goes out into “Man’s world.”

Amusing hijinks and lots of explosive action ensue.  How’s that for a summary statement?

In the end, Diana learns the truth from Ares.  Her sacred sword is not “the god-slayer”; she is – and she does so, explicitly in the name of love.

One can rightfully complain about this resolution, I guess.  For example, Steve Kenson complains that defeating war in the name of love by blasting someone into oblivion seems paradoxical, to say the least.  But I also understand that the movie needed a big finale in the third act and so Ares is destroyed.

Steven Greydanus, who generally loved the movie (and who I usually trust as both Catholic and a fan of comic books), saw a different problem: according to what is revealed in the movie, Zeus really is the creator of humankind and Ares really is the source of discord in the world.  These are not mere stories, but reality in the world of the film (and thus, presumably, of the whole DC cinematic universe).  There is no room for the One True God, for the saving action of the Christ, or the role of the devil in the subversion of man’s innate goodness.

To which I am inclined to say: so what?

The truth is, we have Zeus as Creator, Ares, the son of the Creator who hates and manipulates mankind, and Diana, the daughter of the Creator who saves the world and destroys the power of sin through the power of love.   Essentially, we have a loose re-telling of the Truth about creation, the Devil’s influence, and the mission of God to save the world He has created, only with a female Christ figure and a lot more explosions.

Some see this as dangerous: in a world that so blithely ignores God and is so confused about gender, we don’t need ancient stories that offer easily ignored versions of divine action in the world and feminine savior figures.  I prefer to see the movement of the Spirit in a more positive light.  I think that if we can find God hiding in the images of the story, as I suggested above, then I think we can walk away from the story with a closer relationship to our Creator, if we allow ourselves to do so.  This isn’t to minimize the importance of clear catechesis and good theology – but after all, we’re talking about a Wonder Woman movie, not an Apostolic Exhortation.  And if that leads us to reflect on the power of love, and sacrifice, and virtue, then I think we have a good thing.

Like I said at the outset, there’s a lot more I’d love to talk about regarding Wonder Woman.  If you’re interested in more, let me know in the comments!