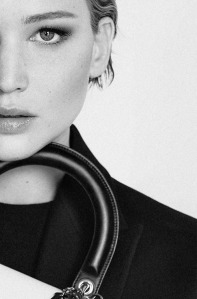 A few weeks back, I had wanted to comment on the celebrity hacking scandal. There are a lot of interesting elements to these unfortunate events, but when I finally found some time to write, I thought the moment had passed.  That was before the newest issue of Vanity Fair came out.  In it, there is an interview with Jennifer Lawrence – her first public statement since her pictures were among those hacked.

For a popular, talented, young woman, these are exceptionally sad words.

Utterly ignoring the celebrity status that made her a target in the first place, this attitude essentially absolves men of responsibility for their own chastity and relational maturity. This attitude says that men need sexual pleasure – and if they can’t get it from you directly, they need pictures to help them get it for themselves.

Jennifer Lawrence has been “pornified” with the theft of her personal photos. This is a crime and she is a victim.  But the cruelest irony is that she had already pornified herself by believing that taking these photos was necessary to be in a “loving, healthy, great relationship.”  It was foolish of her to take these photos in the first place; it was an objectively poor moral choice.  But the fact that she took them (along with similar photos evidently taken by scores of other famous people) speaks to far greater problems within a culture that has ludicrously overemphasized the pursuit of sexual pleasure.

To love another is to see the other as a person made in God’s image and to respond to that image with the desire to make a gift of ourselves to the other. But the reduction of the other instead to a mere vehicle for one’s selfish sexual pleasure is not loving.

A healthy relationship recognizes the challenges that arise, such as long distance and time apart, and responds to them in a reasonable way, so that both partners can draw strength from the bond of love, rather than demonstrate their dependency on only one aspect of the other.

A great relationship is one that inspires the man and the woman to realize how graced they are to love and be loved; they share the power that comes from that love with all the people with whom they come in contact, and this, in turn, betters all of their relationships.

A relationship that requires one to debase oneself as a mere object to satisfy another’s biological urgings, especially with the rationale that if one doesn’t, he will just objectify someone else for the same purpose, is neither loving, nor healthy, nor great.

Perhaps in time, Jennifer Lawrence will regret these words. Earlier in the article, she admits that saying anything about this incident has been very difficult for her, so maybe this came out worse than she intended.  But it seems reasonable to conclude that this is at least her explanation for why these pictures exist.   She is also no doubt not at all alone in applying this rationale to this poor choice.

We need to reclaim the truth about our sexuality. We need to understand this great gift and its purpose to bring forth and sustain life.  We need to believe that it is possible to see ourselves as more than mere animals (I could also comment about Maroon 5’s new song and video of the same name, but that will have to wait for another time).  If we would only commit to this as a culture, even greater joys await us as we continue to build up the Kingdom.